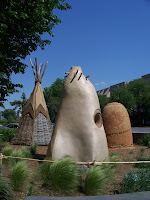 In the Summer of 2007, on two small plots of land, near the busiest street in Washington D.C., an art project called,
Always Becoming began construction. For nearly two months in the heat and relentless humidity of a Washington Summer, a crew of eight along with a host of volunteers built five organic, ephemeral sculptures on the grounds of the National Museum of the American Indian on the Smithsonian Mall.

The experience of working under such unusual circumstances created an opportunity for a unique collaboration. Who would have guessed that mixing mud and layering adobes would also create a community and yet, that's exactly what happened. Children were encouraged to help mix mud with their tiny feet. People often arrived bringing food to share with everyone. Visitors to the museum gathered daily taking pictures and asking questions about the project. One afternoon a man in a suit came to the site and asked if he could help us. He put down his briefcase and shoveled gravel for an hour of intense labor. When he was done, he picked up his briefcase and disappeared back into the city. The kindness and support we received during those two months humbled me and reminded me daily that something grand was taking place. And in all of the activity- being on a noisy street, interacting daily with throngs of people - the sculptures got built.

So, as we prepare to make an hour long documentary revisiting many of the socio-cultural and environmental issues of this project, we welcome you to become apart of our discussion as we navigate through the next phase of Always Becoming.