Starting a new endeavor is both exhilarating and a bit daunting. The night before the Margaret Archuleta Interview I wake up and go through the “to do” list. ‘Questions for the interview typed out and in my folder by the door,' Check. 'Everybody’s confirmed to be at the right place, at the right time,' Check. I’m certain I’ve missed something and proceed to torment myself by playing the, “What have I forgotten?” game. That’s the “daunting” part of starting a new endeavor, navigating the first steps of a vision.

In the morning with the truck loaded and everything seemingly on track, we head out to Albuquerque, New Mexico for the Margaret Archuleta interview.

Margaret Archuleta was a selector for the NMAI outdoor Sculpture Competition. She and other selectors reviewed applications and made selections on the finalists. In making a final decision, the selector’s thoughts turned toward important issues surrounding the competition. Issues like possible sculpture sites on the NMAI grounds, what the selected piece would represent for the museum and how the sculpture responded to the competition's prospectus.

The first thing I noticed when coming into Ms. Archuleta’s house were the books. Books stacked on tables, books piled on her computer’s desk, lining the walls and filling the house. It’s clear why Margaret was chosen by NMAI to be a selector for the sculpture competition. Besides her professional experience, Margaret’s innate curiosity and ongoing learning process offers a unique and insightful perspective.

Margaret’s house is small so almost immediately there was quite a discussion on how to set up the shoot and effectively compose the visual aspects of the interview. In the end the camera was set up in the kitchen and and Archuleta sat in the dinning area converted into a study/office space. We constructed a back drop using a large painting by Native artist, Kay Walking Stick. Using some of the thicker books for weight, we placed lights around and under Margaret’s desk for better lighting. After the set up and a few glitches, we shot the interview.

Here are some of the questions we asked Ms. Archuleta:

1. Tell me about your experience with Contemporary Native Art?

2. Tell me about your curatorial experience at the Heard in Arizona, and with the White House?

3. What kind of ideas about art did you bring into the NMAI Sculpture Competition selection process?

5. When and how did government take an active role in determining the kind of art Native people made?

6. Where do you see Native Art in ten years?

Of course the questions were meant to jump start the conversation and like most interviews, the answers flowed here and there into related and non related issues. Here’s where the “exhilarating” part of making a film kicks in. Once everything is set up and at last the camera is rolling, the thrill of knowing spontaneous thoughts that have been captured on camera will be pieced together with visuals and sounds to tell a story, making the experience ripe with possibilities...how exhilarating.


I want to thank Margaret for opening up her home and generously giving us so much of her time on that day.

Next blog I’ll introduce you to Dax Thomas who is the main camera man and editor on this project.

Finally, after a long day of filming, we celebrated the first steps of making Always Becoming... 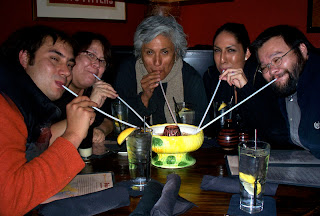