Chapter I
The Family of Sculptures

The five sculptures of Always Becoming have clearly begun their transition. The red coat of plaster on the smallest sculpture known as Hin Chaa or "Baby" has almost washed away. The second layer of mud and straw surface is highly textured and richly organic looking. The fired clay balls on the top of "Baby" are holding tightly to the surface giving the piece a tribal look and feel. Mason Bees have started burrowing small holes into the surface of Gia, more commonly known as "Mother". Because of the wind's direction, rain travels through a channel between the NMAI building straight toward Gia who has all but lost her Micaceous clay coating making her, of all the pieces, look like an older building from the Southwest- think Chaco Canyon, Mesa Verde. Ta or "Father" and Pin Tse deh (Mountain Bird) or "Brother" - the two Tee-pee forms- are still standing with their dignity in tact, awaiting the Yam vines to cover their surfaces. A few pieces of plaster have chunked off so during this visit, Gail Joyce with Conservation and the Mellon Fellows - trainees in Museum Conservation - and I spent time cleaning and oiling the pieces.

As an aside, during the presidential inauguration a man who'd come to witness this historic event crawled inside the "Father" sculpture and started a fire with inauguration flyers and pieces of bamboo. A guard on duty noticed the flames and discovered the man inside of the structure who was "Just trying to keep warm". 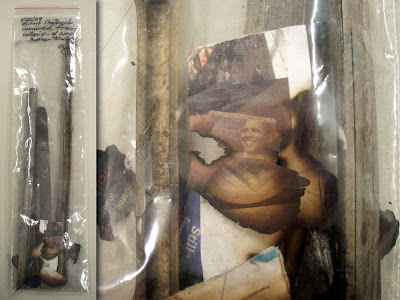 Moon Woman the largest and most sensual form, is holding up well. The very top point of the sculpture has has begun to dissolve turning once crisper lines into even rounder curves. She is regal looking, maintaining a presence of solid certainty and dignity while maturing into a matriarch.

The weather has now become an official partner in the transition and creative design of these five ephemeral pieces.

The next chapter of the Always Becoming sculptures will truly be about weather, land and human stewardship.

What a curious experience to sit under fluorescent lights at the NMAI's Suitland archives flipping through volumes of Native photographs. Page after page of cultures rich in ceremony, land and community, images of a much different cultural experience than the one I live as a contemporary Native woman. While looking at a second generation image of an adobe building, protected under plastic,I traced the image with my finger and guessed that this post modern phenomena was a commonality that contemporary Natives understand all too well and, is in fact, a large part of our cultural experience. Looking at a print of my culture that once was, captured by a photograph and hermetically sealed and stored for protection spoke volumes about the degrees of separation that I feel about culture. What does culture mean now in the era of casinos and golf courses? And more importantly to me, what do we do with what we have left of culture?

Again, looking at a photograph of Santa Clara Pueblo - circa 1930, I could hardly recognize my own community, but as I studied the image closer, something about the land surrounding the structures reminded me of home. I was struck by the notion that the land humans occupy was and still is crucial to our cultural survival, to our human survival. The rolling, grassy plains of the Osage, the wet and lush timber land of the Northwest coastal tribes and most familiar and close to my heart, the parched, textured earth of Pueblo is the soul of culture.

The land surrounding the NMAI museum represents the core values of the indigenous world view. The tobacco grown on the grounds of the museum, harvested and shared. The Grandfather rocks placed in each of the four directions, guarding and protecting everyone who passes by, even the Mason bees burrowing into the surface of Gia, are all part of the Eco-system born from the land that inspires, returns us to core values and allows us to become in our evolution.

* A special thanks to Kathy Suter for setting up our visit at the NMAI's Suitland archives and to Lou Stancari at the Archival Department.
Also to Gail Joyce for her on going stewardship of the Always Becoming sculptures.