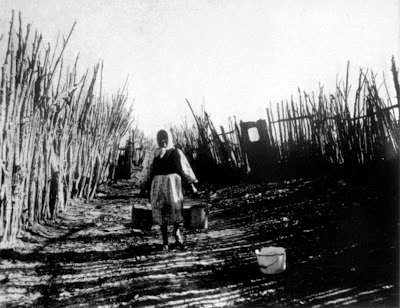 Virginia Romero was a Tiwa Indian from Taos Pueblo, New Mexico. Virginia weighed all of 90 pounds and stood four and a half feet tall on days when she wasn't hunched over with a bundle of some kind on her back. Her long black hair never left the tidy knot at the back of her head and on days when the task at hand was especially dirty and laborious - plastering with mud or tanning a hide - she wore a blue and white bandanna. Virginia spoke little English and rarely traveled beyond the reservation. From the moment this wiry workhorse of a woman woke up until she went to sleep, Virginia worked and she worked hard.

Virginia lived with her husband and five children below the Pueblo near a grove of apricot trees and chokecherry bushes that followed a narrow stream toward the cow pastures. The Romero family like everyone else in the community lived a traditional, simple lifestyle. There was little of anything so the idea of wasting food or other resources was unthinkable and since the primary source of food and shelter came from the land, the land was never taken for granted.

Virginia's life was and still is a metaphor for the land she once walked on and regarded with such reverence. Culling natural resources for the family's survival through harsh Northern New Mexico Winters and filling her children with a cultural and spiritual nutrient that was as important to survival as the meat and fruits she dried in the Fall. And, like the Tewa belief system, women like Virginia were born from the earth, were a part of the earth during their life time and then gave themselves back to their original mother when their human body no longer contained them.

Recently while interviewing Lee Ann Martin, I thought of Virginia Romero and the correlations of these two women.

Lee Ann Martin is a curator at the Canadian Museum of Civilization in Ottawa. Lee Ann was one of the selectors for the National Museum of the American Indian's Sculpture Competition. Lee Ann's contribution to the selection process, along with her interests in land issues made for a good interview for the documentary on Always Becoming. Lee Ann is also in the planning stages of a new exhibition that will open at the Canadian Museum of Civilization in 2011. The exhibition will look at the land in terms of renewal and sustainability from an indigenous-art perspective. Interestingly, the same issues surrounding the pieces of Always Becoming and, the land base consciousness echoed from Virginia's life surfaced in Lee Ann's interview.

Virginia and Lee Ann were born at different times and under different circumstances, but common was and is their appreciation of the land and land-based knowledge. Women like Virginia and Lee Ann carrying their bundles of wood or ideas to create a fire or land based art exhibitions, women who in their own right are responsible for generational renewal. These strong female voices come from the reservations and or urban settings reminding every day we are apart of the cultural continuum.

Next month:
"Who Knew" Imagery And Self Image Reversals - A Post Victim Narrative